The Road To Hell Is Paved With Good Intentions 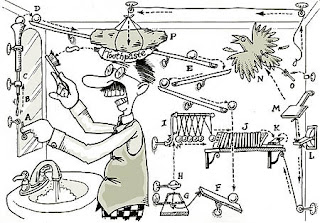 While the news media has been busy lately looking for disgruntled ex wives and off shore accounts, there has been some other news more relevant to the aviation industry.  Yesterday I was reading about the late Rube Goldberg, whose cartoons became well known for depicting complex devices that performed simple tasks in indirect, inefficient, creative and convoluted ways.  I couldn’t help but think about recent events in Europe in the pursuit of environmental nirvana. Their new carbon tax system, ETS, the harbinger of a cap and trade system in the United States, went into effect January 1, 2012.  It has been in effect less than a month it is already having a profound effect on airlines that fly within and without Europe.


IATA, the International Air Transport Assn., has estimated that the ETS will cost the airline industry overall $1.16 billion this year, up to $3.63 billion in 2020.  Passing on the costs to consumers alone will not work, according to a 2007 study commissioned by the aviation industry. It found that airlines would themselves have to absorb a large proportion of the additional costs, estimating that complying with the ETS would cost carriers more than $60 billion between 2011 and 2022.

The ersatz logic of the European carbon tax (i.e. cap and trade) was explained in a World Bank draft report on "Mobilizing Climate Finance.  "…..a modest carbon tax — at around $25 per ton — would be a straightforward way to cut aviation emissions. The tax would raise ticket prices 2 to 4 percent, the World Bank estimates, while emissions would fall by 5 to 10 percent. Slightly fewer people would fly, but most of the gains would come from airlines finding more efficient routes and sending their older, dirtier aircraft into early retirement."  Aviation generates about 3% of the world’s CO2 emissions.  It has been estimated that US carriers are responsible for about half of that percentage.
Biofuels have been touted as a major part of the plan to reduce CO2 emissions from jet aircraft.  Unfortunately, biofuels are not currently a viable option for the airline industry.  They are not widely available.  They are very expensive, about 9 times the cost per gallon of traditional jet fuel.  The kicker is that for all their negatives, biofuels still emit from 50% to 75% as much CO2 per mega joule of energy as traditional jet fuel.
If understood correctly, it means the airlines will be expected to reduce their emissions by flying fewer passengers on less route, on newly purchased aircraft with a limited supply of expensive fuel.  In pursuit of lower CO2, the already overregulated European Union is going to further burden and further regulate one of the few positive segments of the world’s economy, air transportation.  The U. S. State Department argues that ICAO, the aviation arm of the United Nations is the venue for this issue.  It tried unsuccessfully to get the carbon tax postponed or excluded until ICAO decided the issue. The European Court of Justice dismissed the State Department’s suit in December.  In the mean time travelers can expect to pay US$ 3.00 – 6.00 surcharge to the European Union for their trip across the Atlantic.
Some countries have said they may not pay the tax.  The United States, Russia and China among other countries have threatened retaliatory measures if the carbon tax is not rescinded.  Recently the Chinese news agency, Xinhua, editorialized in The Financial Times: “This is a trade barrier in the name of environmental protection, and it constitutes an attack on the interests of travelers and the international aviation industry. It will be difficult to avoid a trade war focused on a 'carbon tax' for airlines.”  The European Commission then responded, “Airlines failing to follow a new European law requiring them to account for their emissions of greenhouse gases could face a ban from European airports.”
The European carbon tax, ETS, may be successful at generating significant additional expense for the airline industry, but it will do almost nothing to change CO2 emissions.  This is an absurd scheme, not because airline companies are environmentally insensitive, but there is no viable alternative at the present time.  Rube Goldberg, however, would be extremely proud of the plan.
Posted by Jim Blaszczak at 5:03 PM