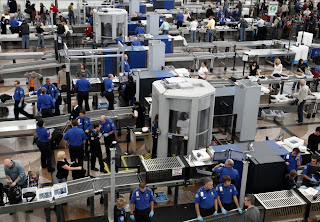 The Transportation Security Administration is the poster child for the incompetence of the federal government.  It's not that they don't do anything, it's that they do it poorly, inefficiently, expensively and insensitively.  We need to demand better of our government.  Protecting its citizens is the fundamental responsibility of the federal government.  It is not that the TSA is not properly funded or staffed.  Screeners are paid very well as unskilled workers.  Requirement for a TSA Screener starting position is the same as a Wal Mart associate.   Screeners generally start at about twice the hourly rate of an employee at Wal Mart and a full benefits package verses the lack of any benefits for the Wal Mart associate.  It's hard to understand why most Wal Mart associates are friendly while most TSA employees do not display a helpful attitude.  When I go through a security checkpoint at the larger airports there never seems to be a lack of TSA employees.  TSA Managers can earn well in excess of $100,000 annually.

In spite of very competitive wages and benefits as well as adequate staffing, there continues to be incidents of screener misconduct and incompetence.  After first denying the allegations of Lenore Zimmerman, 85, of Long Beach, N.Y., and 88-year-old Ruth Sherman, of Sunrise, Fla., the TSA finally admitted this week to improperly screening the ladies medical devices.  In November 2011 these ladies were asked to remove clothing, in an unapproved manner, to conduct secondary security screening.  Ms. Sherman was required to undergo the humiliation of displaying her colostomy bag.  The TSA's justification for these de facto strip searches is to ensure that no weapons get aboard airliners.

On January 18th of this year Judith Kenney, a 65 year old Addison, Texas attorney boarded an American Airlines flight from Dallas to Houston one and a half hours after going through a TSA security checkpoint with a loaded .38 caliber revolver left mistakenly in her briefcase.  There was no intent by Ms. Kenney to carry the weapon aboard.  After an extensive search of Terminal D and considerable disruption to passenger, Ms. Kenney was located on one of the many flight that had been held on the tarmac.  Ms. Kenney apologized to the pilots and passengers as she was taken into custody.  The Ft. Worth Star Telegram quoted Bruce Schneier, an author and aviation security expert about the incident.  "They really made her day miserable, and if she was a terrorist, they would have caught her," Schneier said. "Which means the whole gun system is working great, even if there is a failure."  Mr. Schneier added, "Guns in carry-on bags are spotted 9 times out of 10, so terrorists are unlikely to bring guns into airports given the high chance of being caught."

I might disagree with applauding a 90% success rate of finding weapons given the lengths some of the screeners use.  The real threat, I believe, is the person not the weapon.  Focus the resources on those individuals that can be reasonably identified as a threat.  If there is something in a person's background or behavior that arouses suspicion, I am all for enhanced screening no matter how old or in firmed they are.  I have always wondered why more canines have not been deployed to airports.  Until the latest technology was deployed post 9/11 dogs were more accurate than machines in identifying explosives.  Today, in all but a few airports in the US, crew members must still be screened at the same checkpoints as the customers.  Over a decade after 9/11 we are just now implementing a system that acknowledges the identity of flight crew members.

If the TSA is going to base their security strategy on finding the weapons vis a vis identifying the terrorists they need to come up with a system that is more sensitive to the customers and better at locating contraband at the checkpoint.  Unfortunately, the federal government has decided to address aviation security the same way it does everything else, with lots of money, bureaucracy and political correctness, but very little common sense.
Posted by Jim Blaszczak at 11:50 AM