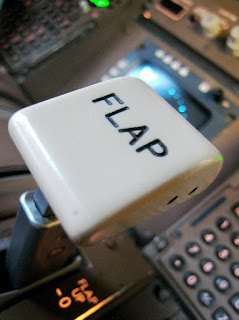 A recent Flight Manual revision for the aircraft I am currently flying changed the explanatory language for setting the flaps on the After Start checklist.  Previously it said, "The Captain's response to the challenge Flaps is the order to select the flap lever to the desired flap setting."  The latest revision added a statement so that it now reads "…to the desired flap setting as indicated on the ACCULOAD (the computerized weight and balance manifest)."  Desired by whom? What would be the "desired flap setting" if not the one on the weight and balance manifest?  Do we have crews getting to this part of the After Start procedure and thinking either out loud or to themselves, "hmmmmmm I wonder what flap setting I want to use today?  I think I'll go with 15."  No, I don't think so.  If we did, that would indicate an incredible breakdown in our training process.  I can accept the need to document in the procedure the flap setting that must be set, but that is a totally different message.  That verbiage would be"…to the setting indicated on the ACCULOAD."

This might seem like a irrelevant and esoteric discussion, but it represents a more profound issue within airline flight operations.  That issue is the role of policy in air transportation. The rules, regulations, procedures, checklist, placards, standard operating procedure that govern commercial aviation.  Is their purpose to be an end in and of themselves and if that objective is met everything else will fall in place.  Or, are they established to create an environment where airlines and their crews are tasked to provide safe and reliable air transportation? Pilot error is still responsible for the majority of hull loss accidents.   Can procedures and regulations be written to reduce or eliminate these accidents?    Isn't an error, by definition, a deviation from procedure.  Maybe the most important regulations and procedures could include the statement, "We REALLY need you to follow this procedure."  Or maybe write a procedure that eliminates errors.

Far too often in our industry, those responsible for flight operations are caught up chasing their tails by writing more procedures to make their crews more compliant.  Procedural standardization is the bedrock of safe operations in the airline industry.  However, unlike the field of dreams, "because you build it doesn't mean they will come."  It is a properly trained AND motivated crew that will create a safe operation not just assume they are operating under the umbrella of one.

When a Northwest crew flew 150 miles past their destination, was it because their procedures were inadequate? If they were, crews should have been flying NORDO all over the country.  Was it because the crew was not properly trained? If any airline is letting inadequately trained crews fly revenue flights there is another more serious problem.  Was this crew poorly supervised?  Who routinely supervises airline crews when they are on the flight deck?  It's not a hard question, it's one of those "Who's buried in Grant's tomb?".  They supervise THEMSELVES!  Or not.

The reason that we can't get the pilot error component under control is because neither the pilots nor their managements want to admit the dirty little secret.  Companies feel they have met their responsibility by developing and training procedures.  The pilots feel they have met their responsibility because they see their job as following a "procedural recipe".  When the inevitable human error takes place the system falls apart.

The more effective operators have introduced error management into their training programs.  The airlines that have made this paradigm shift are heading in the right direction, but they haven't gone far enough.  They have in fact only scratched the surface.  The next big reduction in hull loss accidents will come when crews are trained to make safe operations the goal rather than procedural compliance.  Procedural compliance is an essential component, but not a guarantor of safe operations.   At the present time, pilots routinely confuse what is prudent with what is legal.  The unfortunate overrun accident at Chicago Midway in 2007 is an excellent example.   Because pilots are routinely unsupervised during line operations, they must be self correcting.  To get to this next, self correcting level, companies will have do some humbling self evaluation.  It will take a big dose of personal responsibility by both pilots and managers.  Right now both groups blame each other and the procedures for operational failures.  The pilots will need to "own" the precept that they are responsible for the safe operation of their flight with the resources provided them.  The companies will have to accept responsibility for providing the resources to make that happen.  Primarily, companies will have to accept the responsibility for training their crews effectively in the "mentality" of safe operations.   This training will not be the traditional 90% stick and rudder and 10% CRM.  It will be an entirely new and additional type of training.  This non technical, highly motivational training will require the understanding and mastery of the components and creation of a self correcting crew.  Crews will need to learn the skill of not just accepting, but actively seeking support and critique from their fellow pilots.  Not just the platitude but the practice of "what's right, not who's right".  Companies cannot write and train a procedure that ensures safe operations.  Crews must be trained to self correct and voluntarily peruse the goal of safe operations because they believe it's the right thing to do.

Some companies might claim they already have this environment, but they would be mistaken.  If they did they wouldn't need to worry so much about their pilots wondering what’s the "desired" setting.
Posted by Jim Blaszczak at 4:21 PM