Should We Expect The Unexpected? 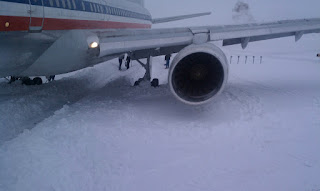 I am back at the "typewriter" after a 1 month hiatus over the Christmas holidays.

Unfortunately December usually brings the airline industry a runway excursion and 2010 was no exception.  It is still far too early to make any judgements on the cause and contributing factors of AA 2253's December 29th overrun of Runway 19 at Jackson Hole, Wyoming.  There is one judgement that can be objectively made.  Runway conditions profoundly influence takeoff and landing performance.

Although the FAA has implemented rule making that requires a landing distance calculation by the crew for every arrival, overrun incidents continue to occur.

Landing distance values are only as good as the assumptions made in their calculations.  There are two categories of factors that keep actual conditions from matching the assumptions used to predict landing distance. Aircraft malfunction and pilot error.  Whether the human or the machine is responsible, the result is the same.  Actual landing performance will not match the predicted value.

Four conditions must be met for landing performance to match the predicted value.  First, the crew must know how to obtain data as well as evaluate and calculate expected landing distance parameters.  Second, the crew must fly the aircraft to the standards that were used to calculate the landing performance.  Third, the conditions at touchdown must match those used in the calculations.  Finally, the aircraft must mechanically perform as assumed in the calculation.

When runway conditions are benign, the most crucial factor is touchdown point because all but a few runways that airlines operate on, far exceed the minimum stopping distance of the aircraft.  Additionally, the effect of thrust reverse on stopping distance is minimal.

When the environmental conditions cause the runway surface friction to deteriorate, the stopping distance and the inability to accurately predict it increase dramatically.  Therefore, when runway friction is reduced there is little if any room for deviation from the four conditions previously stated.  Any deviation from assumed conditions reduces safety margins to a critical level.

In contrast to takeoff performance threats, landing performance threats are not addressed procedurally to the same level.  The 737 overrun accident at Chicago's Midway Airport was an example of this fact.  Even though there was guidance in their manual, the crew was confused by the landing distance calculations.  More importantly though, their unfortunately rhetorical question, "What do we do if this sucker fails..?"  was profound.  They were referring to the auto brake system, but the question is a good one.  Unlike takeoff, there is little guidance for airplane malfunctions on landing.  It appears that the Midway crew failed to deploy the thrust reversers in a timely manner.   The result, though, would have been the same if the failure of the thrust reversers was mechanical.  This possibility exists in the recent Jackson Hole overrun.

The Midway crew initiated their approach without a clear vision of the necessary decision points and possible courses of action that may be encountered on their landing and rollout.  Although poor braking action reports were transmitted and acknowledged, they were in contrast to the numerous successful landings ahead of them.  Additionally, their confidence was increased because they were predicating their assessment of the situation on the assumption that there was no credit taken for thrust reverse in the stopping distance calculation.  This was incorrect although logical.  Why would it be reasonable to assume that the thrust reversers must perform correctly when they were necessary to meet the required performance to stop on the available runway?  Their calculations showed a stopping margin of only 35 feet. It is hard to believe that the landing was "legal" with that thin margin between success and failure.

Takeoff performance acknowledges that less than optimum breaking action requires additional runway for the takeoff to be rejected for an unexpected mechanical problem.   Why then is it not logical to consider the possibility that the thrust reversers may not operate correctly on landing.  That was previously the standard used in performance calculations.

I must advocate that thrust reverse not be considered in landing performance when there is a decrease in breaking action.  As braking action decreases the effect of reverse thrust on stopping distance increases.  With poor braking action the stopping distance without reverse thrust almost doubles in some cases. I realize that there is a payload/revenue consideration to this issue.  However, it is not reasonable to put crews, much less the traveling public in a situation where everything must operate perfectly in order to be safe.  The  Midway crew was legal to make their landing. But was there an adequate margin of safety?  The four company aircraft that landed at Midway ahead of the overrun aircraft used manual braking in contrast to SOP that directed auto braking.  Additionally, thrust reverse was the determining factor in their stopping on the available runway.  It is not reasonable to have a safe outcome predicated on a mechanical device where there are not procedures or performance consideration for its unexpected failure.

Not only should we, rather we MUST plan for the unexpected.
Posted by Jim Blaszczak at 3:57 PM